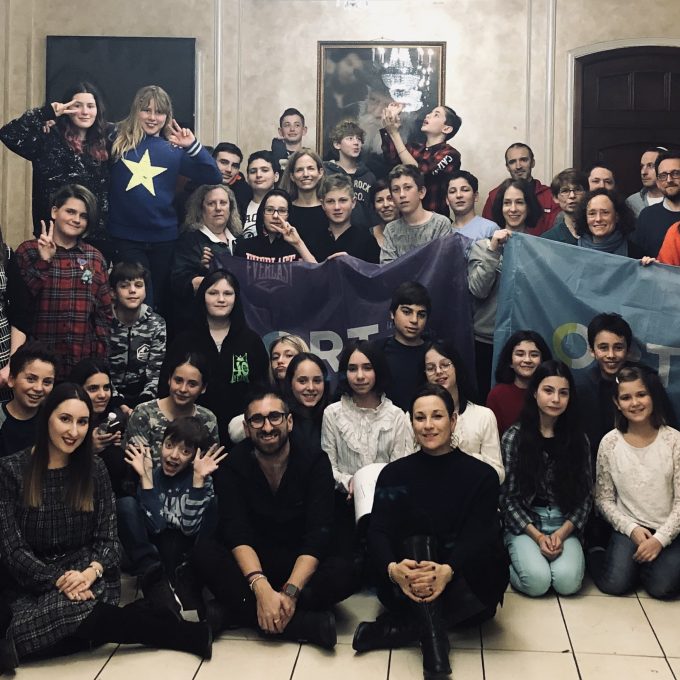 ORT UK’s Bar/Bat Mitzvah families from Muswell Hill Synagogue have arrived home from an incredible trip to Kiev, Ukraine. The 14 UK families toured ORT’s Jewish schools in the region, took part in educational activities with their Ukrainian ‘twins’ and explored the historic city, before holding a moving Holocaust memorial service at the site of the Babi Yar massacre.

Here, some of the participants recount each day of the experience:

Day One – by Maya Robinson

“After arriving in Kiev we made our first stop at the oldest Jewish synagogue (the Great Choral Synagogue), one of only two officially active during soviet rule. Although it was used as stables by the Nazis, it is now a fully functioning synagogue. An unusual feature was the beautiful imagery of the zodiac signs along the walls. We then sat down to eat lunch and the food kept coming! Bowl after bowl of authentic Ukrainian food arrived at the tables and it was all delicious. Our next stop was two cathedrals facing each other – one was over 1000 years old and the other was only 22 years old (the original having been destroyed in the 1930s by the Soviets). For our group is was particularly pertinent that the floor of the older cathedral was covered with Stars of David, symbolising that the Old Testament is considered the foundation of Christianity.”

“Today we met our twins for the very first time which was so fun and amazing to finally meet them. We did lots of activities with them based on Purim, like making masks and decorating little hamsas to go on the doors of our houses. We also did some Israeli dancing and singing of Purim songs which was a lovely way to end our morning with them. Then we said goodbye to our twins and had a feast of chicken, rice and mash. We then went to the Museum of Illusions where we met our twins again. While doing so, our parents went on a small tour around the town. When we were inside we took all sorts of pictures and they all looked really great and they are a great way to remember the time with our twins. The day was awesome, especially doing it with all of our twins.”

“Today we experienced the most wonderful welcome at ORT Simcha school! We celebrated at the (pretend) wedding of two class members supported by a full cast of rabbis and family members. We then met our Bnei Mitzvah twins who skillfully introduced themselves through the medium of mime and tried our hand at challah baking, fetchingly dressed in protective plastic. Some of us were definitely challenged by 6 strands, but mysteriously the bread that emerged was a triumph. As we toured the school we were charmed by the nursery littlies and totally impressed with the coordination of the 4 and 5 year olds doing their exercise class. Then, we got to experience some excellent teaching in robotics class together with our accompished hosts and importantly worked out our parent child tensions in robot sumo (not sure what to take away from the fact that children mostly won!). Finally we shared a delicious meal in the school canteen and together worked to win gifts by conveying our children’s talents through charades. We all came away with the warmth, kindness and joy of the wonderful community at ORT Simcha who welcomed us today.”

“Today we went to Babi Yar. This is the place where the Jews of Kiev that had not already fled, were taken (along with others) in 1941 to their deaths. Little remains of this ravine on what was then the outskirts of Kiev. There are a few Jewish gravestones rescued from the former Jewish cemetery which was flattened by the Soviets. There are now some memorials though. We all were given details of one child who was killed during the Shoah and read out some of their details. We said some prayers and poems and said Kaddish and sang Hatikvah. It was all very moving. The at one time huge Jewish community of Ukraine has suffered terribly from the ravages of communism, Nazism and communism again. But we were there to show (along with the twins) that Jews are still alive and kicking in the Ukrainian capital.” 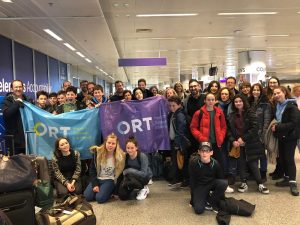 We use cookies to ensure that we give you the best experience on our website. If you continue to use this site we will assume that you are happy with it.ACCEPTREAD MORE